Some people need to see a proctologist in order to find their heads. Robert Mugabe couldn’t be described as everybody’s favourite uncle on the sunniest day of his life, so it seems to lack foresight to heckle him at the state opening of Parliament, on the grounds that he does have something of a reputation for really being quite nasty to those who tick him off. Mugabe arrived at the meeting in an open-topped vintage Rolls escorted by mounted police wearing pith helmets and carrying lances. No colonial residue here, then.
We recall Morgan Tsvangirai’s Movement for Democratic Change yelling ‘foul’ in March an in the solo run-off Mugabe cheated under starters orders and unleashed all manner of nastiness with the help of police and party activists. I’d be quite inclined to vote Conservative if a man with a machete threatened to chop my hand off.
I find myself between a rock and a hard place at this time, so have some sympathy with others.

Ahmedinajad’s  face reminds me of a quiz show host. You can almost hear him asking “Would you survive a holocaust?” And, for five bonus percentage points, tell me why these questions are absurd.

I spent a refreshing sea voyage recently with a prospective Conservative MP. Lest you think I have sold my soul to Beelzebub, apart from feeling as if I had momentarily slipped into a congenial, if deranged alternative reality, I found myself spectating with enthusiasm and enjoying the fried fish and chips thereafter. The lady herself is eminently electable. Good breeding, articulate and appropriately managerial with underlings – indeed refraining from ribald commentary over an inferior Chardonnay. The constituency she represents is one of moderate, God-fearing dinosaurs and it might be interesting to see what happens if she ever had real power. Which brings me to America. The great, the good and the terminally garrulous are converging on Denver, and the TV is full of it. No doubt Barack and Michelle are smelling the floor polish along the corridors of the White House already. A new book, The Great Derangement, by Matt Taibbi, reports widespread lunacy in the national psyche just when America needs to understand the dangerous real world more than ever: “On both the left and the right, huge chunks of the population were effecting nearly identical retreats into conspiratorial weirdness and internet-fuelled mysticism.”. The book has been described as ‘opinionated, profane, depressing and hilarious’.He visits churches that are prayerfully, proudly ignorant of the larger world and equate hatred of Nancy Pelosi who had the temerity to demand equal pay for equal work for men and women in her Californian constituency with love of God. He visits left-wing assemblies seething against President Bush: They’re sure 9/11 was a White House plot. These are fantasies of a sheep-like populace that cocoons itself in Internet escapism and white-hot tribal resentments, with no clue about how real power operates.

“They voted in huge numbers, but they were voting out of loathing, against enemies and against the system in general, not really for anybody. The elections had basically become a forum for organizing the hatreds of the population.”

These are prime-time values no longer. Demonization is big business, even if it ruins the country. Dispiriting, isn’t it. But incomplete, since it ignores an essential bloc of American (read Western) humanity: religious moderates. The backbone of communities, they do the unglamorous charitable work. They are faithful worshippers who discuss complex social issues at Sunday school. They embody an embattled set of values that evolved after World War II, when believers were weary of fascist bigotry and global atrocity — tolerance, patience, faithfulness, internationalism, in other words, decency. Much like many of my shipmates bobbing up and down around the harbour the other day.

Denver, it is noted, is also a ‘no fry zone’ in order to promote healthy eating at the convention. No fried chicken. No fried catfish. No fried green tomatoes. No fried okra. No fried anything. Unlike the Conservatives at sea the other day.

Let’s hope they keep it festive and truthful, digestively calm and confine the hate to two minutes.

Postscript…I found it instructive to crowd-watch during the almost wall-to wall coverage of BO and friends in Denver. The beatific adoration was almost more than flesh and blood could stand, especially as his running mate looks and sounds like a younger, fitter version of John McCain. It’ll be fascinating to see what the Old Guard can pull out of the hat up in Minnesota in the wake of Gustav. Hopefully, a little statesmanship.

Marvellous. GBR wins lots of wonga at the Olympics and the superhuman Usain Bolt and Michael Phelps smash, annihilate or otherwise dismantle records. Fears of terrorist disruption seem to be fading with only five days to go until the IOC calls upon the youth of the world to assemble in London in 2012. I wonder, has the Chinese legendary mistrust of foreigners been softened by hosting the ballyhoo this time around? They have spent the most money, consequently have won more than anyone else, so national pride is satisfied. As Mao once said belatedly, ‘China is on its feet again’. Paying homage to China’s rich history and culture at the Olympics is a good starting point if rapprochement between the most rapidly emergent economic juggernaut in history seeks to assert itself on a cross-cultural stage. The flipside calls on China to get its international act together. Criticism must be aimed squarely at the CCP while keeping China’s national pride intact, as GWB chose to administer in Bangkok on his way to the opening ceremony. Western governments might do well to seek enriched relations between the Chinese community and their own by means of cultural exchange and co-operative projects. The message needs to be unequivocal:

We respect China and celebrate its culture, but demand responsibility on China’s part. Mismanagement of foreign policy, including decisions by Western leaders to pursue delegitimizing actions such as cultural boycotts, will create greater distrust bereft of constructive policy impact.

It’s ironic that the masters of rapprochement in Tel Aviv give such sound advice. Replace CCP with PA. Will it be heeded? Probably not.

Winston Churchill once wrote “It’s not the government that makes war in a democracy, but the people – and the people are asleep in the free democracies today, lulled into inaction by a ‘softening up’ process of our enemy.”
Is Islam the ‘enemy’ of the West? Italy has thousands of polygamous, frequently unhappy marriages, the state appears to turn a blind eye in the name of ‘cultural sensitivity’. In Britain and Spain, where large Muslim communities also have settled, some officials favour recognizing polygamous marriage as a way to ensure the wives’ access to pensions, medical care and other state benefits. One problem seems intractable. The application of human rights, and what the West perceives as ‘civilised’ behaviour is in some cases directly at odds with the Shariat. For example, what are Norwegian Muslims to do, since homosexuality is punishable by death by beheading under Islamic law.
If they all take four wives, they might be able to breed themselves into power, using the very democracy they wish to overthrow. It seems that the clash of cultures is irreconcilable thus. much like fighting dogs, separation or defeat is inevitable. Alternatively, tolerant and judicious planning and a complete paradigm shift in everybody’s thinking might just prevent holocaust. Islam is culturally accustomed to waiting. The West is not. H’m.

It’s been an interesting week. The remains of an ancient Thracian chariot was unearthed in Bulgaria and the next episode of Chariots of Fire in Beijing has begun. The razzmatazz has, of course, to be bigger, better, brighter and a lot more expensive than last time, with, so far, an American dream team – again – convincingly routing the host nation (what, I wonder, is a ‘tomahawk dunk’?) and a swimmer with an independence of muscular control so well-honed that he might as well not bother competing until the finals when he can haul off all eight golds in a handcart. Finally, here’s someone who might be able to topple the legendary Mark Spitz, whose perfect dentition and seven golds I remember seeing in Munich in 1972. This was the same Olympics when members of the Israeli Olympic team were taken hostage by Black September, and twelve lives were lost.
Coincidentally, this week saw the fast of Tisha Be’av when the Jews mourn in commemoration of the destruction of the Temples, presumably also with loss of life. The Ninth of Av was the day, according to the rabbis, on which both great structures were destroyed, the first by the Babylonians in 586 BCE, the second by the Romans in 70 CE. On the eve of the day of mourning and fasting, religious Jews read the Book of Lamentations (Eicha), ascribed to the prophet Jeremiah who witnessed the destruction by the Babylonians. Commemoration of Tisha Be’av takes place most publicly at the only portion remaining, the Wall. Given a choice of the Water Cube or the Wall, I think the latter, in spite of these incomparably perfect synchronised 3m springboard gold medallists, giving China the lead in the medals table.

My apocalyptic streak resurfaces sometimes. The fate of humanity, the Earth and the London Olympics is seriously in question as 2012 marks the termination of the 13th b’ak’tun cycle, and possibly the end of the world, according to Mayan prophecy, which, of course, everybody knows. H’m. Geomagnetic reversal might be the lever this time, which will no doubt bewilder a large number of migrating wildfowl who might find themselves temporarily homeless. I find myself taking the longer view, much like the Archbishop of Canterbury, so catastrophe might be a Black Swan inevitability at some unspecified, Mandelbrotian time, but in the short term, let’s all try to keep the keel in the water and hopefully we all won’t capsize.
The water chute is from the Mayan temple in Atlantis. Of course. Where else… 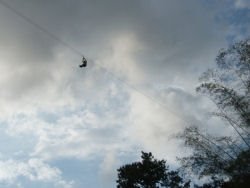 ……….is 1600ft long and an exhilarating ride, especially in the rain. Apart from a frisson of probabilistic, almost Gaussian uncertainty, the adrenalin rush was sufficiently modulated to permit enjoyment of the scenery. Especially upside down. There’s even time to think. I found myself musing on retrospective distortion – an examining of past events without adjusting for the forward passage of time, leading to the illusion of posterior predictability. Fings ain’t what they used to be because we not only remember imperfectly but do so in the context of a personal and limited historical worldview. I went to a dance festival recently – not a bestseller for me – and it was rather like attending as a participant, a children’s tea party. Big fun when you’re six.