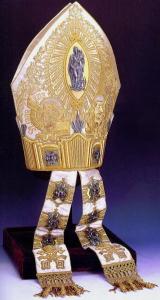 Why am I sick of the established Church? Read on. A little digging reveals a few interesting facts about Bishop Richard Williamson, recently having been made homeless by his expulsion from Argentina and within a whisker of being restored to the fold of the faithful. He wrote:

However, until they (the Jews) re-discover their true Messianic vocation, they may be expected to continue fanatically agitating, in accordance with their false messianic vocation of Jewish world-dominion, to prepare the Anti-Christ’s throne in Jerusalem. So we may fear their continuing to play their major part in the agitation of the East and in the corruption of the West. Here the wise Catholic will remember that, again, the ex-Christian nations have only their own liberalism to blame for allowing free circulation within Christendom to the enemies of Christ.

Food for thought here, especially as the remitter of the excommunication is, of course Benedict, who in a previous incarnation as Cardinal Ratzinger, together with the ultratraditionalist Cardinal Castrillón (who is looking more and more like the author of the rapprochement) was JPII’s messenger boy to try to win back the wayward Lefebvrites.

Yad Vashem, quite properly, has publicly announced that ‘saying sorry’ without retraction really isn’t enough and the Vatican has agreed, assuming rightly that an already fragile relationship between Rome and Jerusalem might be damaged beyond repair unless they were seen to be taking a firm line. Truthful regret, dear Richard, isn’t quite the same thing as recantation, is it? Stop trying to bleed your theology to death using the leeches of far-Right politics and go back to the incomprehensible Latin mumblings that you’re all famous for. Oh, yeah – and it doesn’t do you or the Church much good if you threaten journalists at the airport when they are deporting you, either. At least the Israelis responded with typically Jewish satire and said sorry afterwards, even before the Papal Nuncio complained…

A final word…Vatican insiders know Cardinal Darío Castrillón Hoyos well. The steely-eyed Colombian Cardinal, 79, served for nine years as head of the Congregation for Clergy, where in 2002 he drew the wrath of victims of American-priest sex abuse for denying that the Catholic Church had any particular problem with paedophiles in its ranks.

God save us all from troublesome priests. 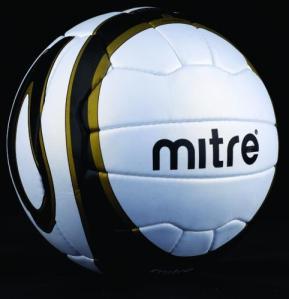 I think I like the football better than the mitre belonging to Pius XI.

There’s a film I’d like to see. The Class follows the relationship between a young, idealistic teacher – I was one of those once – and a troublesome class of 13- and 14-year-olds in an abyss of Parisian deprivation and cultural foment. Child actors actually volunteered – their performances raw, unadorned and natural so one wonders how much of it is genuinely improvised.

The humiliation is soul-destroying but the chemistry between the hormonal, insecure and aggressive adolescents yields extraordinarily insightful moments. By all accounts, this is a film that every MP in the country needs to see and debate.

The despair known to almost every teacher that the interests of the vast majority of these street-hardened kids simply don’t stretch much beyond rap music, hanging out, mobile phones and football. The tragedy is that you also know that they never will, however close you get to making meaningful contact.

I am fortunate since I work in a microcosm of comparatively old – fashioned sanity where a few Aristotelian meanderings are allowed and rules are predominantly followed. The norm is closer to the film’s portrayal, as far as the reviewers tell me.

Today, a short trip down the Gulf Road took two hours since everyone able to walk unassisted took their cars and armed with party foam, spraying everyone within range, hooting mindlessly in celebration of the Liberation. Twentysomethings in fast cars armed with huge multicoloured water pistols sat, impossibly, on their driver’s doors, braking and steering by footwork and luck. Others sat on hoods, waving and cheering, still others were on the roofs of the cars, all bedecked in the national colours. I suppose I ought to be grateful that this is the closest I get to anarchy.

I’d love to be able to vote at the Oscars. When we vote for a best picture candidate, we are voting for more than just a film which captures the heart, engages the mind or provokes the senses. Whether we care to acknowledge it or not, the judges as cultural representatives are voting for a cinematographic paradigm, shaping the way that the movie dollars are likely to be spent two years or more hence, an attitude toward cinema which their particular choice represents. In this day of the evaporating dollar, attitudes that don’t gain the full attention of Hollywood are consigned to history’s pitiless shredder. Though one of the oldest clichés of moviemaking is, “If you want to send a message, call Western Union,” sending a message is exactly what voters end up doing.

I’ve again had the chance to see almost everything before the BIG NIGHT.

What I liked and what I didn’t. “Button’ seems to be one of those iconic films much like ‘The Piano’ after which post-pubescent cinemagoers either shook their heads that they’d paid good money to get in , or it enthused and animated them. Undeniably clever – a unique spin on a number of slow roasters- probably helped a little by the new incumbent at no 1600, I think it might deserve Best Picture. If not – ‘Slumdog’ touches all kinds of nerve endings which might mean that this is going to be the big LA-Bolly fusion movie. It wasn’t Good Night and Good Luck’s night a couple of years ago, but Frost/Nixon as the political representative has been described as ‘electrifying entertainment’.

As a fan of PSH, I thought his performance in ‘Doubt’ was more than a match for Meryl Streep’s malevolence, but the Heath Ledger retrospective lumbers on and he might collect as a swansong.

I’d really like Mickey Rourke to win for ‘The Wrestler’, but there might be a bit too much grit in the mouth for Hollywood’s fastidious palate and it might not stand the test of time. “Gladiator” is still as much fun now on the TV as it was nine years ago as the winner. It might be the lovely Kate’s year. She was nominated in the best actress category quite justifiably for her role as a former SS concentration guard in The Reader – the performance that secured her a best supporting actress gong at last week’s Golden Globe awards, but her performance in thrice-nominated Revolutionary Road (which won her the best actress Globe) was missed off the list. It’s a novelty her films often feature that there’s frequently a two-scener who steals the show and this one was no exception Michael Shannon’s weird but engaging mathematician who had had the mathematics jolted out of him by overenthusiastic ECT kept the attention as did Winslet’s character’s excruciating mother. Memories…

is Arabic for ‘unbelief” and is also the title of Geert Wilders’ iconic documentary for which an invitation to screen it in the House of Lords was overturned by the outrage of a Muslim peer, arguing that it would plunge the country into riot and anarchy.

I have seen it and, like the prophet Ezra, sat down, appalled. Not least because it is shocking – deliberately and provocatively so – but also because an invited EU politician was summarily turned around and scooted back to Holland. Our own version of the First Amendment seems to have suffered a bloody nose. Ironically, fomenters of hatred, violence and terror are quite at liberty, it seems, to use the shelter of their mosques to inflame the population of Europe, including the UK. Gaza won the media battle hands down, Israel remains languidly undecided about who should lead it; Islamic infrastructure grows in strength and influence.

Meanwhile,Wiley-Blackwell, a major academic publisher, has recalled copies of ‘Encyclopedia of Christian Civilization’ and scrapped the print run after critics said the entries were “too Christian” and “too anti-Muslim and not politically correct enough for use in universities.”  I had rather supposed that the purpose of a university education was about teaching people to tell the difference between valid argument and a load of rubbish.

Perhaps I was wrong.

In times of economic uncertainty, a new class of poverty emerges, willing to believe the most persuasive speaker, regardless of the validity of the argument. I wonder whether the prophet Ezra would have shared the same view.

No image this time. In case I get into trouble.