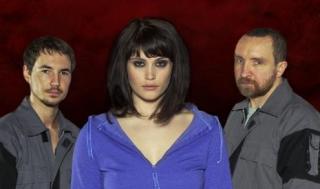 “The Disappearance of Alice Creed”, directed by  first-timer J Blakeson is a thriller about a meticulously planned kidnapping,  and is the type of constricted genre piece Brits are traditionally good at. Throw three actors on a single set, in this case a bolt-fitted, soundproofed apartment, and watch the lightning. The tension is crackling and nobody can get away with a flawed performance since Philipp Blaubach’s cinematography relies heavily on a powerful command of space, gloom and close-ups. Tension is visually sustained so well one can almost sweat with both the victim and the perpetrators. In a taut power-play of greed, ruthless efficiency, duplicity and survival we discover that sometimes even disappearances can be deceptive. Snarling and heavy, with dark sadomasochistic innuendo, it sits uncomfortably enough before bedtime. Yes, it is Gemma Arterton (Quantum of Solace, Prince of Persia:The Sands of Time). Rated sixth at Toronto last year. Eight out of ten.