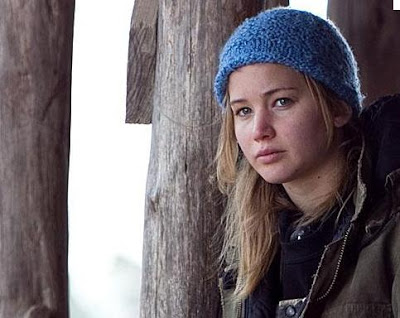 It’s rare for me to pick a film at random that really turns out to be a winner. The Grand Jury prize at the Sundance Festival in 2010 went to “Winter’s Bone”. Filmed entirely on location during late autumn and winter in rural Missouri, the film makes up for small budget with beautifully crafted cinematography and a bleak, sparse dialogue, much provided by the locals, hence with accents so thick it’s hard to make out what’s being said. With an absent father who is in some unspecified fashion, part of the local trade in crystal meth manufacture and a withdrawn, incompetent and depressed mother, a glowering, taut Jennifer Lawrence is Ree Dolly, a seventeen year old earth mother trying to put food on the table for her and two younger siblings in a dirt poor Ozark log cabin, a teenage girl forced into adulthood. Her father has put up their house as bail collateral and unless he shows up for his trial in a week’s time, they will lose it all. All attempts to find him meet with a wall of inbred hostility and menacing silence from family and the local community. It’s a powerful articulation of a vulnerable child-woman pitilessly hurled into a brutally tough, unnerving maternal stance, with Lawrence triumphantly shaping Ree as a soldier fighting for her home – the only shred of comfort she has left in a life of unremitting austerity and misery.

The audience is left with minimal clues as to exactly what is happening or about to happen – we are expected to piece together the snippets, making sense of them as we go. Unspoken dialogue revolves around a jagged ‘omertá’ which the participants believe holds their fragile social fabric together. Think unvarnished Coen brothers and you’re some way there – there was more than a hint of “No Country for Old Men” in the screenwriting.

What’s not said became more significant than what was.

I found myself in an interaction the other day which was less conversation than monologue where words were plentiful but what was not said spoke much more loudly to me than what was. Advice to listen to the actual words, although valuable, became contextually meaningless since I formed the impression that the purpose of the conversation was to supply me with a subtext, perhaps subconsciously. I tried hard to follow this advice, but found myself returning to an initial impression that I was being subjected to diplomacy clad poorly – in the kindest and most well-meaning sense – as of an actor playing a role which I was supposed to see through.

I was left with a nagging disquiet, since truth unvarnished, preferably whole, is almost always better than dressing it up in cheap clothes.