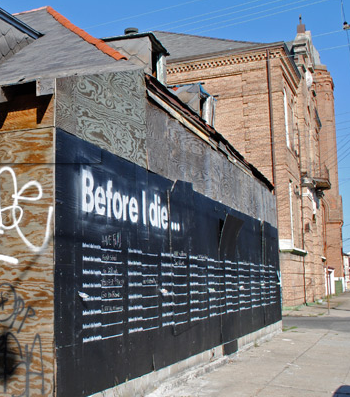 Cindy Chang is a designer. She turned the side of an abandoned house in her comparatively poor neighbourhood into a giant chalkboard where residents can fill in the blanks and remember what is important to them. All they have to do is complete the sentence, ‘before I die I want to…’. It’s also about turning a neglected space into a constructive one where people can learn the hopes and aspirations of the people around them. Great idea. I wish I’d thought of it. I suppose most of us have a bucket list of some kind – a mental must-do of things we’d quite like to but might never get round to or afford to do. I’d like to drive a Ferrari around Monza. I’d also like to have the skill to drive it well.
I’d like to be disciplined enough to finally get a PhD in something valuable enough to impact the lives of others in a positive and constructive way – to contribute, perhaps, to the cause of human happiness – perhaps by emigrating to Papua New Guinea. I’d like to take part in a genuine, indubitable miracle, freebase from the top of the Burj Khalifa, learn to speak another language fluently, play guitar like the insanely talented Phil Keaggy, learn the viola (again) write a book that I can be really proud of, see African children (or wherever) gain lifetime benefit educationally from something that I have given them, speak or play to spellbound multitudes….the list goes on and is probably of no interest to anyone but myself.
But, what of others?  How would Gaddafi complete the sentence …before I die I want to…’trample on the bloodstained, rotting corpses of those who dared to defy my despotic ambitions in the ruins of Benghazi’, perhaps. Some might have more modest, less overarching desires. ‘I want to make a difference’ is a phrase oft-repeated on the Wall. Make a difference to whom, and for what purpose, I wonder? We all, I think, want to ‘make a difference, almost as validation of our continued presence on the planet, a footprint in the eternal sand, not fading like Rubashov’s ‘shrug of eternity’, the final sentence in ‘Darkness at Noon’.
Google has over sixty-eight million pages containing the words ‘make a difference’.
We curmudgeons do schmaltz rather sparingly. However, for dewy-eyed, soft, warmhearted, compassionate human beings…this is for you.
It’s called the  ‘Make a Difference Movie’. Stop jeering.

One thought on “Make a Difference”