I sometimes blunder into other people’s theological reflections, almost by mistake and thoughts from someone’s study often contain quite a few litt 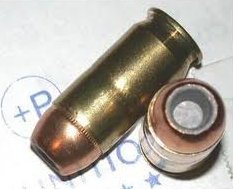 le gems.
Came across these the other day…
‘Here is a curious thing. Liberal Christians find it impossible to believe that God raised the dead Jesus, yet accept without difficulty that God created the world. After the latter, you’d think the former would be a piece of cake.’
‘The New Atheists have come to their senses. Having finally realised that hurling abuse at believers is strategically incompetent, they are now trying flattery. For example, last year Christopher Hitchens called Rowan Williams a “sheep-faced loon”.’
‘I would like to help Christians in the UK who say they suffer from persecution substantiate their case – by feeding them to the lions.’
‘Preachers who are universalists are just hanging around for the paycheck.’
‘WWJD? Ask Oprah.’
‘If due to deforestation bears no longer shit in the woods, will the pope still be Catholic?’
‘My wife once threw an ashtray at me. It whizzed by my head and took a chunk out of a brick wall. That is what grace is like – except God doesn’t miss.’
‘If your faith doesn’t make you both kinder and angrier, you’ve lost it.’
‘Were we ever to reach unanimous agreement on issues of faith and order, the age of ecumenism would come to an end. So would the church.’
‘Are people who pray happier and healthier than those who don’t? Only if they are not doing it right.’
‘Bartimaeus said to Jesus, “Take it from me, Lord, blind people actually walk along together quite safely. It’s when twenty-twenty twits try to help us that ditches become dangerous.” And Jesus said, “Oh.”’
‘Recently, a minister in the United Reformed Church wrote an article in which he admitted that while he didn’t understand Paul’s theology, he was quite sure that the apostle was an entrepreneur. Well, he was half right.’ 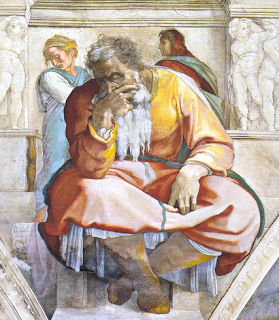 ‘Experience has taught me that prayer is often a way to be narcissistic with both a good conscience and public approval.’

‘Prosperity Gospel Jesus: “I am the Alpha and the Romeo.”’
I used to think that Christians who put the fish symbol on their cars were looney tunes. Now I think they are simply being considerate – by letting people know that there is a crap driver at the wheel.
The upper image is of a ‘flying ashtray’ bullet, so named because it fragments on impact, causing maximum damage. The lower is Michelangelo’s Sistine Chapel depiction of Jeremiah. H’m.