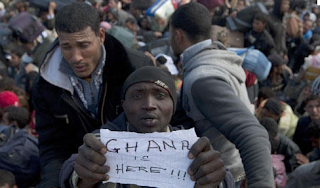 The exiled poor in the Libyan conflict are the voiceless ones most to be pitied. Many of them are illegal immigrants from Ghana and Nigeria – an impoverished underclass in Libyan society – living amidst piles of garbage, sleeping in makeshift, blanketed tents haphazardly strung from fences and trees and breathing fumes from an open sewer which divides their camp from the parking lot of Tripoli’s main airport. All of them are desperate to escape and many report they had seen deaths from hunger and disease almost every night. Scrawny babies are born with a feeble grasp on life and without proper medical attention for either themselves or their mothers. Without sufficient money, papers or the wherewithal to escape, tragically, over a million illegals from sub-Saharan Africa are caught in the middle. But, worse follows. These are the ones in a classic Catch 22, most particularly dark-skinned Africans who are routinely robbed for money and valuables by loyalist guards at the checkpoints and attacked on sight by the rebels who believe them to be sub-Saharan mercenaries hired by the Gaddafi regime. Streets remain uncleaned, construction projects halted and people are dying. Their own governments have, it seems, left them to fend for themselves and the security stranglehold around Tripoli has prevented aid from reaching them in the makeshift squalor of their camps.
Led by the French, the Americans and the British, air strikes have begun in response to UN Resolution 1973, ostensibly to enforce a no-fly zone. The reality may be somewhat different as may the outcome, since crippling Gaddafi’s airpower is a fairly straightforward objective and preventing ordnance being emptied indiscriminately on the civilian populations in rebel held strongholds like Benghazi is achievable. But, what then? Gaddafi is still at the controls, his tribal allegiances are undiminished and his willingness to slaughter unabated. How then should the operation proceed after these primary objectives are met? Coalition forces have picked a fight. It remains to be seen whether they can finish it or not. I wonder if the sea of human misery encamped around Tripoli airport cares very much who wins, since it will inevitably be the loser.