Various pundits have commented recently about the influence of mass communication technology on the recent unrest in the Arab world. Twitter is now five years old and has grown into a dangly (or is it gangly) adolescent. Personally, I don’t get it, thus have little of value to add to an already overcrowded debate. Why does the entire online population have to be informed that one’s socks are not dry or one has just missed the number 27 bus?
Tech-savvy yoof however has allegedly used social media to generate foment, unrest and what used to be quaintly called treason by sheer volume of 140 character comment, most of which has as much political weight as the arrival or not of public transport and it’s worrying to reflect on the notion that if enough people tweet about something the subject matter acquires respectability, veracity and authority in consequence – the ad populum fallacy. I myself, on the other hand, find 140 characters not nearly enough and use a different logical fallacy, proof by verbosity, to prove a point. This is sometimes referred to as argumentum verbosium, a rhetorical technique that tries to persuade by overwhelming those considering an argument with such a volume of material that the argument sounds plausible, superficially appears to be well-researched, and it is so laborious to untangle and check any supporting facts – there may very well be none at all –  that the argument might be allowed to slide by unchallenged. I find that burying the listener, or perhaps, the reader, in $50 words is equally, if not more effective.
I think I’m the only person I know who has used the word ‘moreover’ in a text message since I find the rape of my mother tongue in whatever context by illiterate spamheads, flatheads, pinheads and crackheads a little bit perturbing. Additionally, when texting, one does needs to be quite sure about the recipient’s identity. Caveat lector, with apologies for the missing full stops, also comma after ‘ex’. 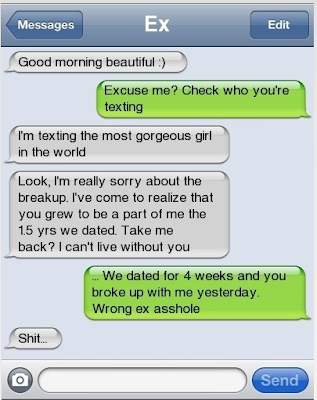