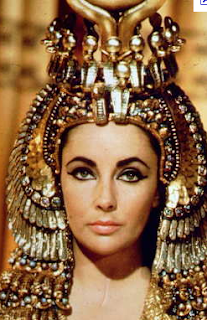 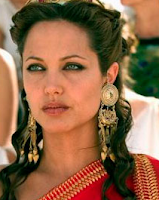 Elizabeth Taylor died today. She was twenty years older than me which didn’t seem to prevent me at eleven from suffering all kinds of pre-adolescent fantasies. It must have been those smoky eyes, or perhaps lingerie manufacturers in the sixties were trained differently, but nobody seems to have quite the knack of making what the Germans call Büstenhalter‘ in quite the same way these days. The Germanic capitalisation confers a certain, well, insurance I find. London lingerie shop Rigby& Peller used to sell a flesh-coloured object which resembled a surgical appliance with nose cones. I’m certain she must have bought some.
‘Cleopatra’ might have been a spectacular box-office flop but the memory of Richard Burton as a brooding, aggressive Mark Antony representing the rise of Roman power alongside the smouldering Taylor as the waning glory of Egypt can still be brought to mind after all these years, later surpassed only by the much more sophisticated ‘Who’s Afraid of Virginia Woolf”.
Married eight times, twice to Burton, she was undeniably a boy’s girl. What is it about the Welsh warrior poets?

There are whispers that yet another version – the twelfth, or even the thirteenth – is in plan, almost certainly with Angelina Jolie and perhaps – inevitably – Brad Pitt.
Side by side…? No contest.